According to a survey conducted for the consumer advocacy group Which?, between the months of February and August, wait times at the West Yorkshire airport were estimated to be 35 minutes on average.

Nearly 1,300 travelers from a UK airport were questioned by researchers about how long they waited in line for security during that time period.
Over 25% (27%) of Leeds Bradford customers reported waiting more than an hour to go past security.

The airport erected electronic screens in August that give travelers real-time data on anticipated wait times.

Travelers at nine airports, including Bristol (17% of respondents), Birmingham (11%), and Manchester (8%), reported standing in security lines for more than an hour.
Seven percent of those polled said that they have missed a flight due to being backed up in a lengthy line.

Earlier this year, there was significant disruption at airports throughout the UK as a result of staffing issues and a rise in demand for travel following the removal of coronavirus restrictions.

As a result, there were several airline cancellations, baggage handling issues, and lengthy security lines.

According to a representative for Leeds Bradford, “earlier this year, we saw periods of large queues due to the rapid return of foreign travel after the easing of pandemic restrictions, like many airports across the UK.

“We worked arduously to address those immediate problems and were open about these challenges at the time.

Since then, we have greatly decreased the amount of waiting in our terminal.

We are still dedicated to providing the finest travel experience at Leeds Bradford Airport and being a top airport in our area.
The investigation found that London City had the best performing airport, with an estimated average wait time for security of only 12 minutes. 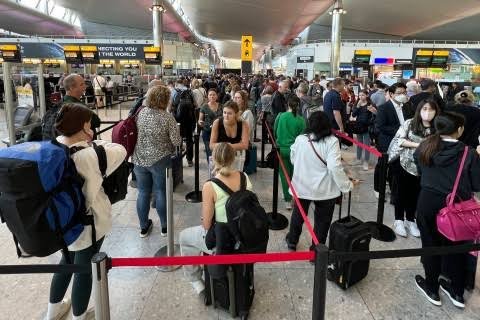 The majority of people who used the airport reported waiting between five and ten minutes.

The average wait time for Glasgow International and Belfast City was 13 minutes, placing them joint second.
“Travellers this year have bore the burden of unprecedented disruption at UK airports, with significant numbers suffering long lineups and some even missing a flight due to exorbitant wait times to complete security,” said Guy Hobbs, editor of the travel magazine Which?

“Your airport of choice shouldn’t determine the success or failure of your trip, but for too many travelers this year, that has been the case.

Even if it means traveling a little bit further from home, we advise picking an airport with a higher reputation for handling travelers well.

According to a representative of industry group the Airport Operators Association, “the aviation industry faced considerable employment issues as international travel resumed. Up until March, the UK had one of the most restricted travel regimes in all of Europe.

“Our airports have worked incredibly hard to address these staff shortages, and the vast majority of customers were able to enjoy the summer vacation with little interference.

“We recognize the effect that any delay or disruption can have on passengers, and the aviation industry is continuing to work together and with Government to recover from the impacts of the pandemic – and the nearly complete shutdown of UK aviation – to ensure that all passengers enjoy the service that passengers have rightfully come to expect of UK aviation,” the statement reads.

According to the Which? survey, the following are the typical reported security wait times at UK airports between February and August: