The Superyacht Design With A “Molten Staircase” Is Inspired By Volcanoes. When it comes to developing fresh and inventive superyacht concepts, inspiration can come from a variety of sources, including diamonds, sharks, and even spaceships.
Additionally, Anthony Glasson of design firm M51 has created a brand-new design that draws inspiration from volcanoes and appears to have explosive potential.

Forge, which is 262 feet (80 meters) tall, is actually designed to look like the outline of a volcano on the water. According to recently released renderings, the effect is quite striking.
The pyramid-shaped superstructure is made of aluminum, has a black and orange exterior, an ice-class steel hull, and what the designer refers to as a “molten staircase,” even though it resembles a conventional staircase suspiciously. 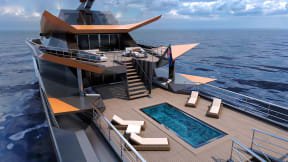 The yacht, which is expected to cost up to $100 million, has eight suites and can hold up to 12 passengers.
Forge is as eye-catching as it comes with fold-out balconies, a walk-around bridge deck, the aforementioned staircase, and a counterflow swimming pool.
Glasson claims that one of the many stunning elements on board will be vaulted ceilings in the sky lounge thanks to the vessel’s unusual design.
Additionally, there will be a health club on board with a fully eu gym, a sauna, and a flotation tank for guests to use 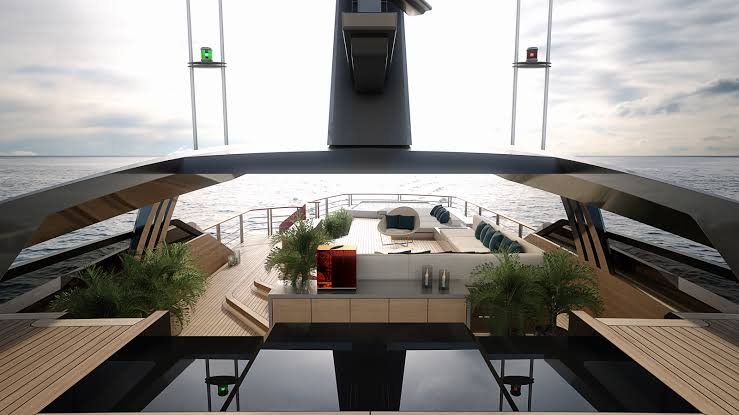 The ship will feature its own private theater with a VR room, as well as a garage for the tender that will be loaded with a variety of water toys like jet skis, extreme sports gear, and scuba and snorkeling gear.
The vessel will have a range of about 5,000 nautical miles thanks to its hybrid diesel-electric propulsion system (around 8,046 kilometers).
Even though it’s only a concept right now, Glasson estimates that if it were to be built, the superyacht would take between 2.5 to 3 years to complete.

The idea has received a lot of attention since it was originally unveiled earlier this month, despite the fact that there hasn’t yet been any “real” interest from purchasers.
Just a few months prior, Glasson’s futuristic superyacht idea Solar Express, which was influenced by the 2004 film “The Polar Express,” was unveiled.
Meanwhile, earlier this year, Italian design firm Gabriele Teruzzi Yachts & Design debuted the 110-meter (360-foot) Stella del Sud idea, which was modeled after the renowned Cartier 128-carat diamond.