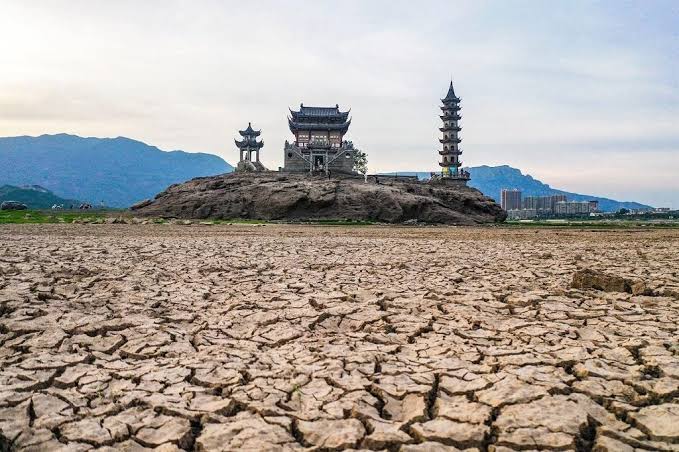 China’s POYANG LAKE, August 24 (Reuters) – A pagoda-topped island in China’s Poyang Lake, which is normally completely submerged in water in August, is now fully visible, attesting to the catastrophic effects of a protracted drought and heatwave on a crucial component of the nation’s irrigation infrastructure.

Poyang, the largest freshwater lake in China, is referred to as the “kidney” because it controls the Yangtze River’s flow through Jiangxi province, taking up floodwaters during the typically rainy summer and then significantly draining during the dry autumn and winter.

The lake has shrunk more sooner than typical this year and is only a fifth of its size from a few months ago as a record heatwave in the Yangtze basin lasts for more than 70 days.

The inhabitants claim they have never seen anything like it.

The lake had water in it last year, according to local resident Zhang Daxian, aged 57. “I’m not sure what occurred this year. It’s really dry.”

Sand mining, the construction of the Three Gorges Dam, and other large-scale dams upstream have all had an adverse effect on Poyang’s hydrological functions throughout time.

People could stroll on the lake’s cracked and burnt flats on Wednesday while dodging dead fish and mussels, though other residents didn’t seem to mind.

Zhang, a 51-year-old former employee of the regional fishery department, claimed that “it is merely climate change.” “It occurs. It is typical.”

In 2020, fishing was outlawed on Poyang Lake.

Shipping and drinking water sources for adjacent areas have also been impacted by the shrinkage. According to state broadcaster CCTV on Tuesday, authorities have already started releasing water from the Three Gorges and Danjiangkou reservoirs to help with the shortages in the downstream.

According to Du Lei, an engineer with the Ministry of Natural Resources’ remote sensing center, several of the lake’s little feeder rivers have entirely dried up while the lake is still draining.

Because of the lake’s surface diminishing, he claimed, “the entire northern half of the lake is more like a river.”