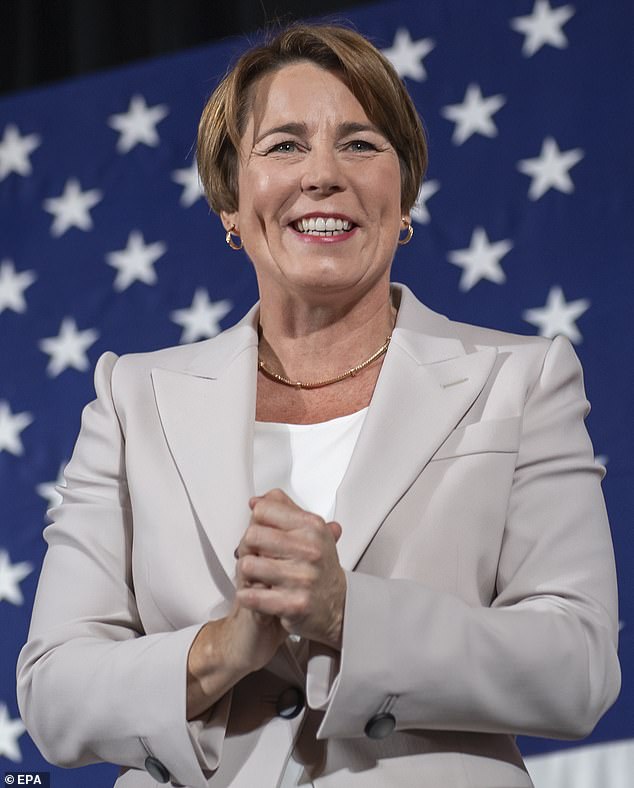 The 51-year-old Democrat won the seat back after eight years of Republican control, handily defeating Geoff Diehl, who had echoed the former president’s allegations that the 2020 election had been rigged.

Tuesday night, she received more over 55% of the vote, whereas Diehl only received 38.5 %.

Healey, the former attorney general, was therefore seen as the front-runner in the election, with surveys showing that she was far more popular than her Republican opponent.

Healey said: “To every little girl and every young LGBTQ person out there, I hope tonight teaches you that you can be anything, whatever you want to be.” in her victory address on Tuesday night.

I want you to know I’ll be a governor for everyone, and I’ll work with anyone who’s up for changing this state, whether you voted for me or not,’ she concluded. 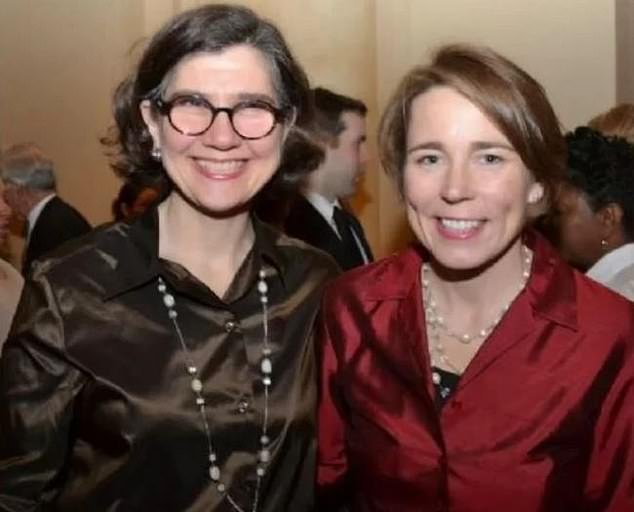 Healey is pictured with her longtime partner, Gabrielle Wolohojian, in an undated picture

She promised, “I’ll be a governor for everyone battling with increased costs,” adding, “I’ll create tremendous clean energy jobs.”

Regarding abortion rights in the state, she asserted, “And as long as I’m governor, women will always have the right to their own bodies.”

Together, she said, “we’ll build a stronger Massachusetts for everyone.” 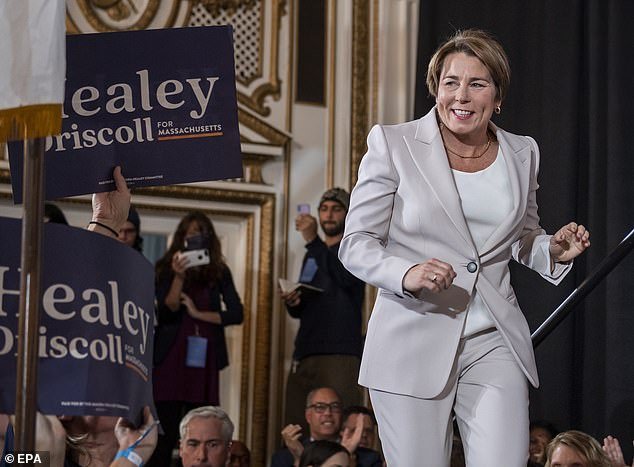 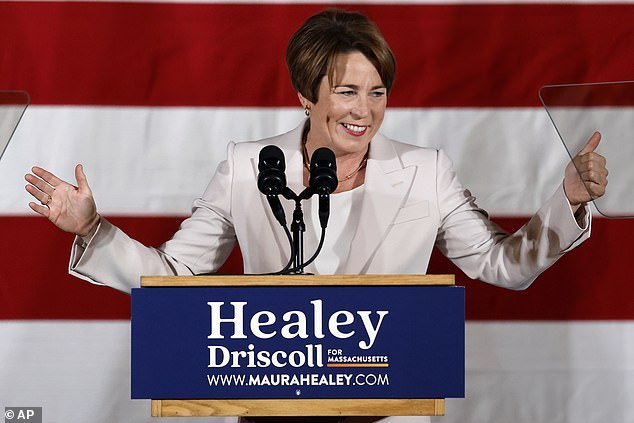 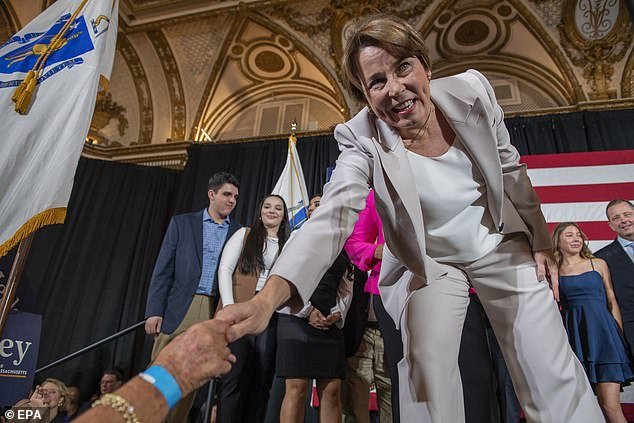 Healey vowed to be a ‘governor for everyone’ upon taking office 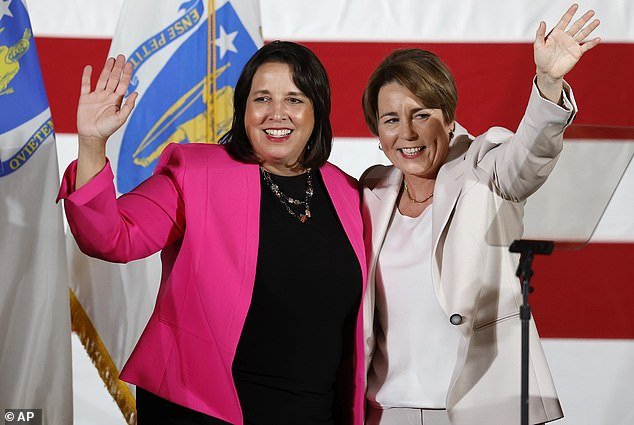 Healey is pictured with Lt. Gov-elect Kim Driscoll. They are the all women team to serve as governor and lieutenant governor 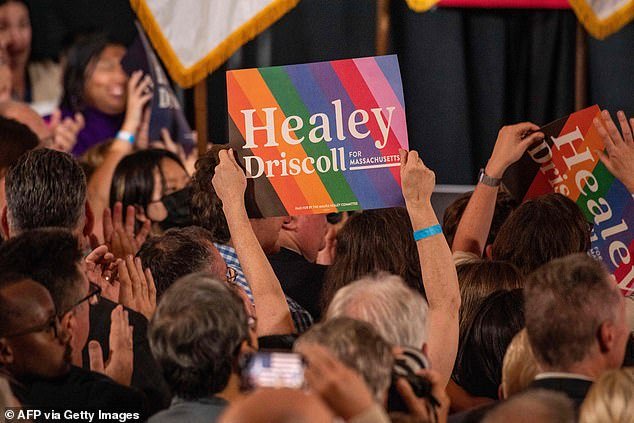 Along with her two brothers and two sisters, Healey grew up close to the New Hampshire border.

She and her siblings continued to live with her mother when her parents separated when she was ten years old.

She said to WBUR that her mother once exchanged her wedding band for the construction of a basketball court outside their home.

And I believe that’s where my basketball career really started to take off, she said.

She subsequently went to Harvard for her basketball career, where she served as team co-captain before deciding to play professionally in Austria for two years.

She made a name for herself by contesting the federal Defense of Marriage Act, a 1996 law that permitted states to restrict rights to same-sex married couples, while working for then-Massachusetts Attorney General Martha Coakley.

Her subsequent appointments included chief of the state’s Public Protection and Advocacy Bureau and chief of the Business and Labor Bureau, both of which she held until she quit to run for attorney general.

As she started or joined numerous of cases against the Trump administration, including those challenging his alleged Muslim travel ban, defending immigrant rights, and suing the EPA for postponing or rolling back environmental standards, Healey gained increased notoriety throughout her term in office. 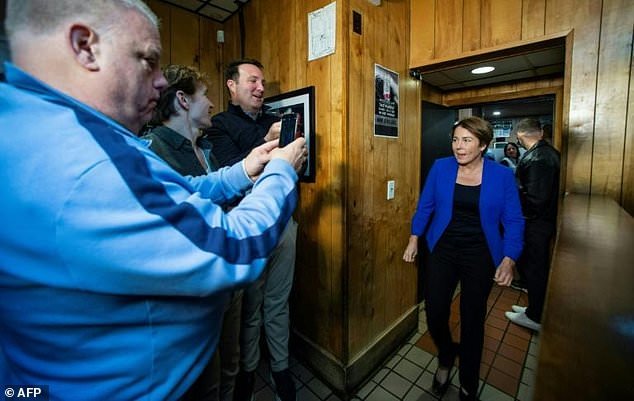 Maura Healey makes her way into a room full of politicians and supporters in Boston, Massachusetts on November 8, 2022 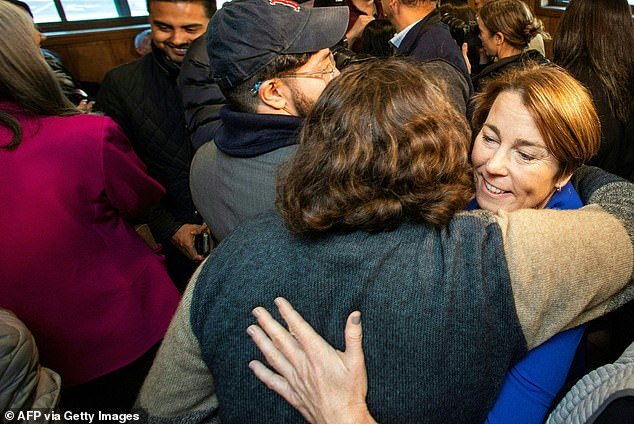 Healey ran for governor on a platform that included a long list of Democratic issues, such as increasing access to affordable housing, advancing green jobs, and enhancing public transportation.

She proposed opening up state land for development while providing financial assistance to first-time homebuyers, people with low incomes, and the elderly. She also promised to establish a cabinet-level position to oversee housing and speed up the construction of new homes.

Healey also promised to make Massachusetts a “hub for renewable energy innovation” by 2030 and to attain net zero emissions there.

She said: “Let’s put money back in people’s pockets by decreasing the expenses of housing, electricity, and healthcare” upon accepting her party’s candidacy for governor in June. 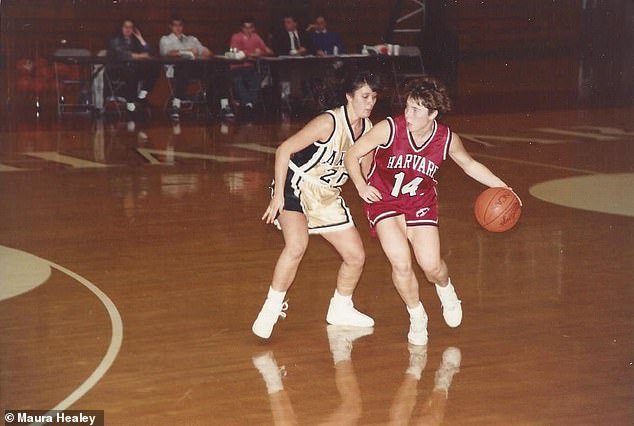 Her triumph has cemented her position as a leader in the LGBTQ community.

In a prior interview with a local NPR station, she declared, “I’m happy of who I am,” adding that she is especially moved whenever LGBTQ youth in the neighborhood tell her that their success has given them solace.

“Kids need to know and trust that they are loved, seen, and that they may be whoever they are,” the author writes.

Massachusetts adopted a program of equality and inclusion by electing a pro-equality champion, according to a statement from the group’s interim president Joni Madison.

The triumph comes at a time when LGBTQ candidates are running in this year’s midterm elections for the first time in all 50 states and Washington, DC, as the community grows in strength as a voting bloc.

In a contest for governor that was considered to be close, Democrat Tina Kotek—who is also lesbian—was attempting to equal Healey’s victory in Oregon on Tuesday.

In this year’s primary elections, about 90% of the LGBTQ candidates are Democrats.