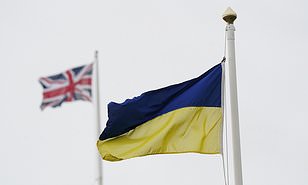 According to a survey, Ukrainian immigrants to the UK are having problems renting since they do not have a guarantor or references.
The data also show that some have relocated since entering the nation as a result of “relationship issues” with their sponsor.

While they are working in different positions than they did previously, there has been a “significant” increase in the number of persons who fled war in their home country and are now employed in Britain.

A sample of persons who had entered the UK in June using Ukraine visa programs were questioned as part of an experimental study by the Office for National Statistics (ONS).
A follow-up survey after earlier ones this year was conducted online between October 17 and November 7 and attracted 3,148 participants.

According to Tim Gibbs of the ONS, most Ukrainian immigrants are establishing themselves and their families firmly in the UK, working to improve their English, and accepting jobs even when they don’t match their prior expertise.

There are still difficulties, though, like getting their professional credentials recognized and finding private rental housing when their funds allow.

The results showed that 45% of respondents “had obstacles to securing private rental accommodation,” with the lack of a guarantor or references being the biggest obstacle (59%).

One in four respondents (24%) reported having moved since June. The most frequent response was that they could now afford to live independently, although 1 in 6 (16%) claimed they were having “relationship troubles with their sponsor.”

Additionally, there was a “substantial increase” in the proportion of persons who reported working in the UK, going from 19% in June to 56% in the most recent data.

However, 65% of individuals in employment did not work in the same industry as they had in Ukraine.

According to the ONS, “much fewer visa holders are currently employed in the UK in financial services as well as in teaching and education.” 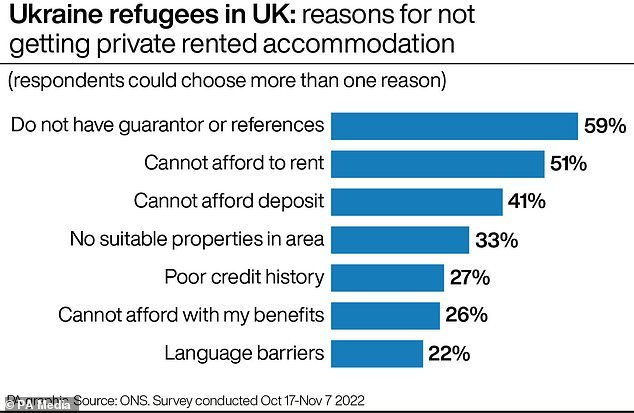 A considerable increase from 37% in the prior period to 60% of visa holders reporting having enough money to support themselves and their dependents for the upcoming three months.

The percentage of those who pay for their own housing has also increased, going from 6% in June to 19%.
Adults reported having accounts with the majority (97%) of UK banks and post offices, a significant increase from the 82% who did so in June.

Still, half of respondents reported having “difficulties finding work” in the UK. The biggest obstacles were their qualifications not being recognized or valid in the UK (33%), and their English language proficiency not “meeting work criteria” (56%)

However, since June, there have been “much more respondents” (from 44% to 57%) who could speak English fluently or “a decent lot,” and improvements in levels of reading and writing have also been noted.

This survey follows-up Ukrainian nationals settling in the UK who completed our first survey during June 2022.

In order to allow people escaping the violence in Ukraine to enter the UK for up to three years, the government introduced two visa programs in March.

According to government statistics, 144,600 individuals had entered the UK as of November 14 using Ukraine visa programmes.

Compared to 38% in June, 50% of survey respondents indicated they believed they would remain in the UK for at least another three years.

Care should be used when interpreting the results, according to the ONS, which is conducting the UK Humanitarian Response Insight Survey to “understand the thoughts and experiences of persons coming in the UK” under the programs.

Minister for housing and homelessness Felicity Buchan stated, “Our commitment to the Ukrainian people remains constant, and I’m glad to see that so many of individuals we welcomed to the UK have settled well into their communities.

We have offered advice and local authority funds that can be applied for in order to help landlord organizations address any concerns with renting to Ukrainians. Councils have a responsibility to make sure that no Ukrainian family goes without a roof over their heads if this is not practicable.