Russia declares war on Ukraine, claiming that the country will be demilitarized 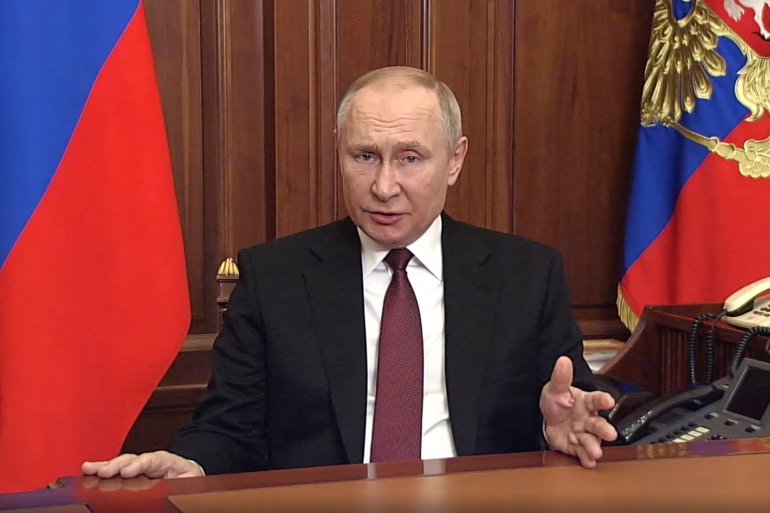 Vladimir Putin, the president of Russia, said that Russia will launch “a special military operation” to “demilitarize” Ukraine, which means that Russia is now at war with Ukraine.
Before 5am in Kyiv time, Putin said that NATO was putting Russia’s existence at risk and that he would send Russian troops into Ukraine to protect it.
Declaring that Luhansk Oblast and Donetsk Oblast are independent states comes a few days after Russia recognized them as separate states on Feb. 21. This is the second time Russia has done this.
Russia has been taking over parts of Ukraine and the peninsula of Crimea since 2014.
People who were put in charge of occupied areas in eastern Ukraine after the “recognition” asked Russia to protect them from the supposed attack by the Ukrainian army, which there has been no proof of.
Responding to their speech, Putin said that the “special military operation” was going to start right away.
Russia’s reason for the attack:

But Ukraine has said that it doesn’t believe Moscow’s claims that it is trying to force them back. 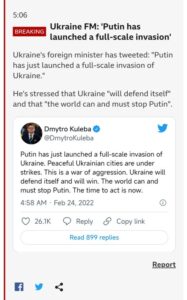 There were a lot of airports and military headquarters in cities across Ukraine that were hit first. The main international airport in Kyiv was one of them.

A city of 1.4 million people called Kharkiv was one of the first places tanks and troops came into Ukraine. They came from nearby Belarus and Crimea. They took over an important airbase outside of Kyiv, and Russian troops also arrived in Ukraine’s big port cities of Odessa and Mariupol.

President Putin said on TV that Russia could not be “safe, grow, or exist” because of what he called a “constant threat” from modern Ukraine. This was just before the invasion began.