Report: Countries That Shut Down The Internet In 2021 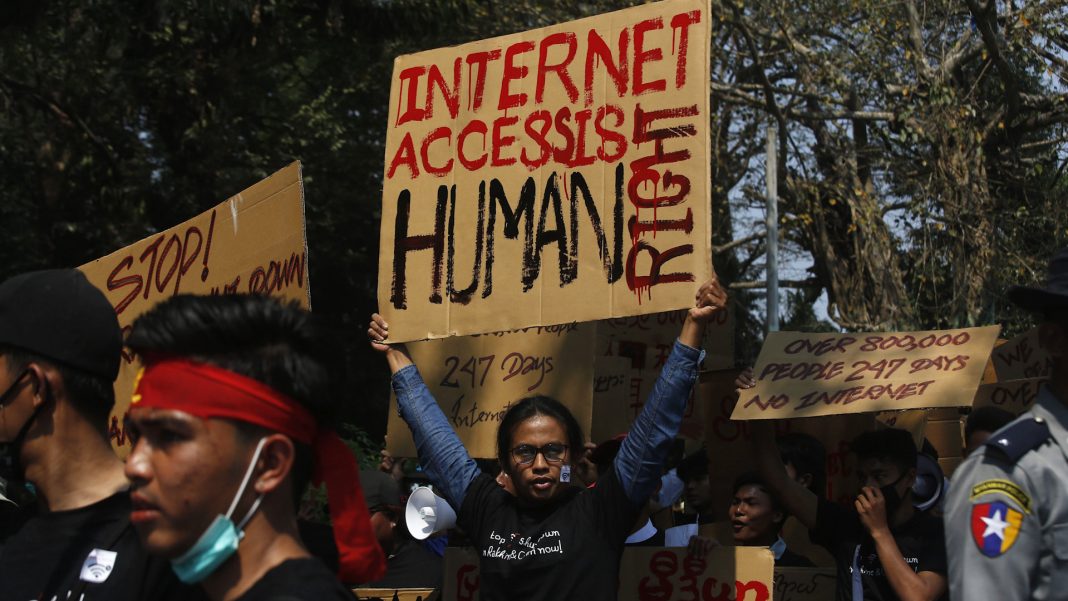 Access Now and the #KeepItOn alliance identified 182 internet shutdowns in 34 countries in 2021. In comparison, 159 shutdowns were registered in 29 nations in 2020, indicating a substantial revival of this coercive type of control. Read our new research, The return of digital authoritarianism: internet shutdowns in 2021, for a comprehensive examination of patterns and causes over the previous year.

Censorship, information restriction, and isolation from the outside world are the fundamental elements of a government’s journey towards digital dictatorship — an internet shutdown is a tried-and-true all-in-one instrument for achieving total control in a single, rapid operation.

Internet outages are always risky, and 2021 has shown exactly how destructive they can be. Throughout the globe, governments have used blackouts during demonstrations, civil disturbances, wars, and crises, creating a dangerous precedent for 2022. Authorities in Ethiopia, Myanmar, and India started the year by shutting down the internet in order to quash opposition and impose control over people. Israeli bombings in the Gaza Strip destroyed communication towers as well as newsrooms for Al Jazeera and the Associated Press, while rising censorship in Russia foreshadowed what was to come.

A detailed examination of the 2021 data indicates that what may have been a narrative about the worldwide drop of internet shutdowns after the pandemic actually demonstrates a return to the pre-pandemic period’s rights-harming practices. Between 2020 and 2021, there was an increase of 23 shutdowns.

This worldwide overview includes crucial statistics and numbers as well as real-life examples from Access Now’s new research, The return of digital authoritarianism: internet shutdowns in 2021. The entire study contextualizes statistics on internet outages with additional research and analysis of developing patterns. We hope that this report serves as a cautionary note: disregard internet outages at your risk. They are never an indication of human rights respect, a healthy democracy, or good government. Read the whole report.

Please check your privacy-enhancing browser extensions if you can’t see the highlights below. For the best experience, open in desktop mode. 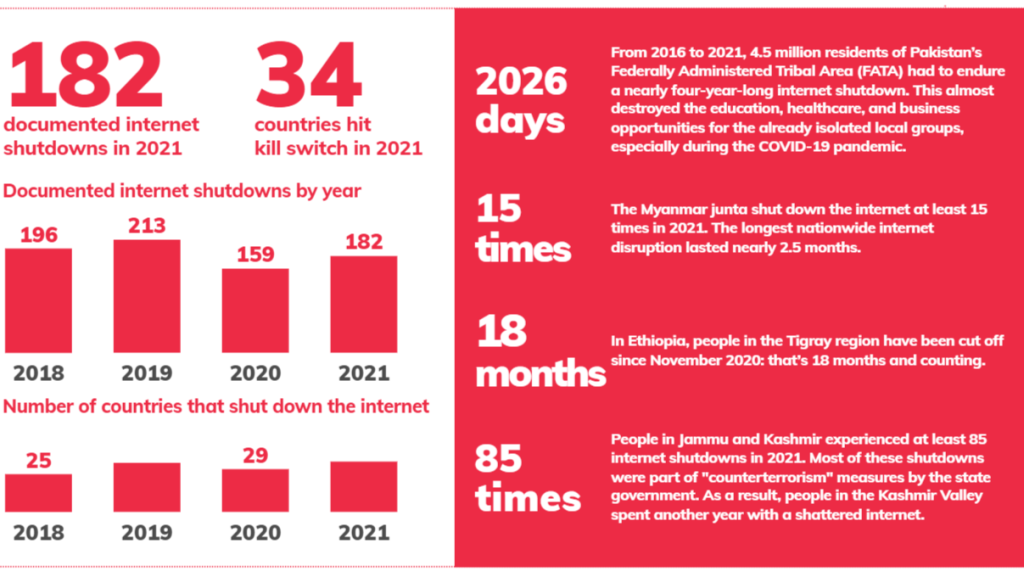 EVENTS:
Protracted shutdowns: By 2021, millions of people in Ethiopia’s Tigray area, India’s Jammu and Kashmir region, Pakistan’s Federally Administered Tribal Areas (FATA), and Myanmar’s Rakhine state have endured multi-year shutdowns. This is a dangerous trend in which some governments are extending their meddling, worsening the devastation they create. Since November 2020, Ethiopia’s Tigray area has been without internet access: that’s 18 months and counting.

Authorities in 22 nations reacted to public criticism and opposition by banning access to particular communications platforms. For instance, authorities in Pakistan blocked access to key social media sites such as Facebook, Twitter, and TikTok in advance of scheduled anti-government rallies. Other governments went even farther, criminalizing or prohibiting the use of virtual private networks (VPNs) in order to prevent individuals from circumventing censorship.

Combining throttling, blocking, and network shutdowns: In 2021, the #KeepItOn group identified ten incidents of throttling – the intentional restriction of data flow across a network — five of which occurred together with another sort of shutdown. Jordan, Russia, and Uganda have implemented throttles in conjunction with platform restrictions, thereby prohibiting the sharing of recordings or photographs exposing human rights atrocities. Algeria, India, Iran, Iraq, Jordan, Myanmar, Russia, and Uganda all suffered from throttling. Governments are progressively experimenting with and using novel approaches and tactics to thwart detection and circumvention of their blockings.