Over $10 Billion In Damage Has Been Inflicted By The Floods In Pakistan, According To A Minister 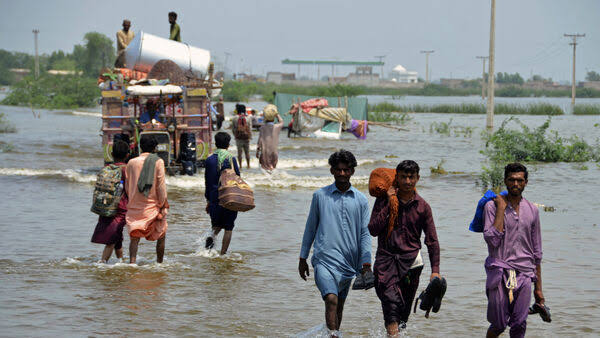 According to officials, deadly floods that might inundate up to a third of Pakistan by the end of the monsoon season have already cost more than $10 billion in damages as the world responds to the crisis-stricken nation’s cries for assistance.The anticipated cost was disclosed by Planning Minister Ahsan Iqbal on Monday, telling CNN that Pakistan needed help from the rest of the world to deal with the consequences of climate change.
The Pakistani military said in a statement on Tuesday that rescue operations were still in progress and that foreign aid, including seven military aircraft from Turkey and three from the United Arab Emirates, was beginning to reach the nation.More than 300 stranded persons had been airlifted away, more than 23 metric tons of relief supplies had been provided, and more than 50 medical camps had been set up, with more than 33,000 patients receiving treatment, according to the statement.
The announcement added that China will send two aircraft on Tuesday carrying 3,000 tents and Japan will send tarpaulins and shelters, in addition to the announcements of financial support from the UK, Canada, Australia, and Azerbaijan.
As the South Asian country struggles with political and economic unrest made worse by the unprecedented floods, the International Monetary Fund (IMF) threw it another lifeline on Monday by releasing $1.17 billion in bailout funds. This prevented a default on the country’s debt obligations. 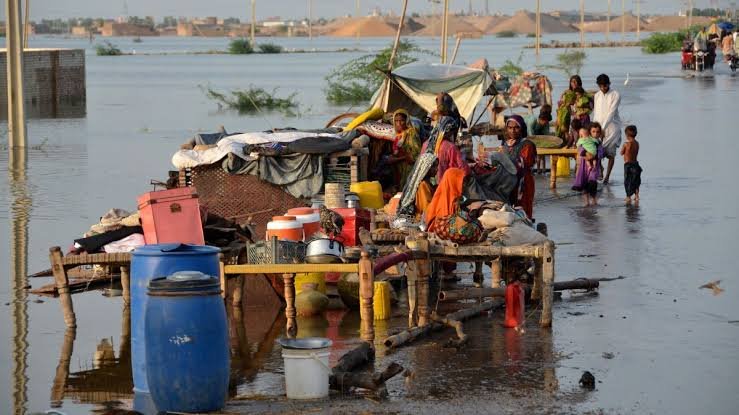 In his nearly three decades of service to the relief organization, Peter Ophoff, chairman of the International Federation of Red Cross and Red Crescent Societies (IFRC) in Pakistan, told CNN that he had never witnessed flooding on the scale of the current disaster.”We will be in this for a very long time,” he said. “Pakistan is in desperate need.” “We’re not talking about months, but years.”
According to the International Rescue Committee, the flooding and heavy rains have had an impact on 33 million people, or 15% of the population (IRC).
Since mid-June, at least 1,136 people—including 386 children—have died and 1,634 have been injured, according to the National Disaster Management Agency (NDMA).Fears of further fatalities increased as a result of the relentless rain. According to NDMA, the floods have also devastated significant infrastructure, including more than 130 bridges and close to 500,000 dwellings.Sherry Rehman, Pakistan’s minister for climate change, said last week that by the time this is through, “we may have a quarter or a third of Pakistan under water.”

As floods overwhelmed the nation, dramatic calamity scenes played out there.
In Chadsadda in northern Pakistan, Ali Jan told Reuters on Monday that it was raining but not very hard. However, that suddenly altered.
Jan claimed, “All of a sudden the outer wall of the enclosure fell and water flowed in.” “We just about made it out alive. The water had almost reached waist depth by the time the women were ready to leave the house. Both the livestock and the ladies were removed. You may see the remainder there. Additionally, crops were devastated.” 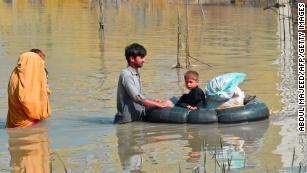 Ihtisham Khaliq Waseer, the NGO’s digital media manager, claims that in films posted by the Alkhidmat Foundation Pakistan, its volunteers helped a youngster and an old man cross swiftly rising floodwaters using a bed frame and improvised pulley systems.
According to him, the NGO’s more than 3,000 volunteers are dispersing aid all around the nation.
“We are getting relief, but it’s not enough with what we need on the ground,” he said, adding that volunteer teams have been working tirelessly for weeks to transport supplies to difficult-to-reach places.
According to weather forecasts, Waseer expressed hope that his crew will be able to provide food rations and set up tents when the rains lessen and the flood levels recede in the upcoming week. 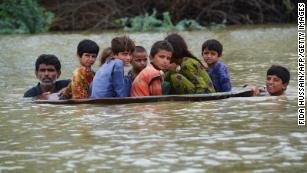 According to scholars and assistance organizations, Pakistan has already disproportionately suffered from the climate problem before the floods. In the Global Climate Risk Index published by the non-profit organization Germanwatch last year, Pakistan was placed as the eighth country most adversely affected by climate change from 2000 to 2019.
Pakistan suffers fatal flash floods that destroy a crucial bridge.

According to Abdullah Fadil, UNICEF’s representative in Pakistan, “This is a climate disaster.” “The situation is largely the result of actions taken by wealthier nations, and I believe it is time for the international community to act to aid Pakistan in its hour of need.”
Shabnam Baloch, the national director for IRC in Pakistan, said in a statement on Monday that despite creating less than 1% of the global carbon footprint, Pakistan is “suffering the effects of the world’s inactivity” on climate change.
Nearly 20,000 people require urgent food supplies and medical assistance, and the risk of diseases spreading in flooded areas has increased due to a shortage of hygienic facilities and safe drinking water, according to Baloch.

Our requirements analysis revealed that the prevalence of diarrhea, skin infections, malaria, and other ailments has already significantly increased, she noted. “We desperately need donors to increase their contributions and support us in saving lives.”

According to the IMF, the money set aside for disbursement on Monday is a component of a bailout arrangement for Pakistan that will “place Pakistan’s economy on the road of sustained and balanced growth.”
According to Antoinette Sayeh, the IMF’s deputy managing director and acting chair, “Pakistan’s economy has been buffeted by severe external conditions, due to spillovers from the war in Ukraine, and domestic issues,” in a statement on Monday.
IMF policies have drawn criticism in the past for compelling recipient countries’ governments to eliminate social programs and privatize domestic enterprises.