Pop star Kim Tae-Hyung aka V is the Hottest Man Alive in 2022. The Netizens Report made an official confirmation today as the cover for the month of August has just been unveiled.

A few months ago, our editors compiled a list of the most gorgeous male celebrities who are the most adored on the internet as of 2022. This resulted in a roster of the most popular and charismatic males in the entertainment industry worldwide. Therefore, we asked the question, “Who merits this title in 2022?

Well, we put it up to the netizens to decide. Hundreds of thousands of votes were tallied, and the Internet reaches a conclusion. With a list of nominees that included Theo James, Timothee Chalamet, Rege Jean Page, Can Yaman, Jeon Jungkook, Henry Cavill, Halil Ibrahim Ceyhan, Kerem Bursin, Ryan Gosling, Jack Harlow, Jason Momoa, Cha Eun Woo, and Adam Levine, the popular Korean singer and actor Kim Taehyung won with 63% of the votes. 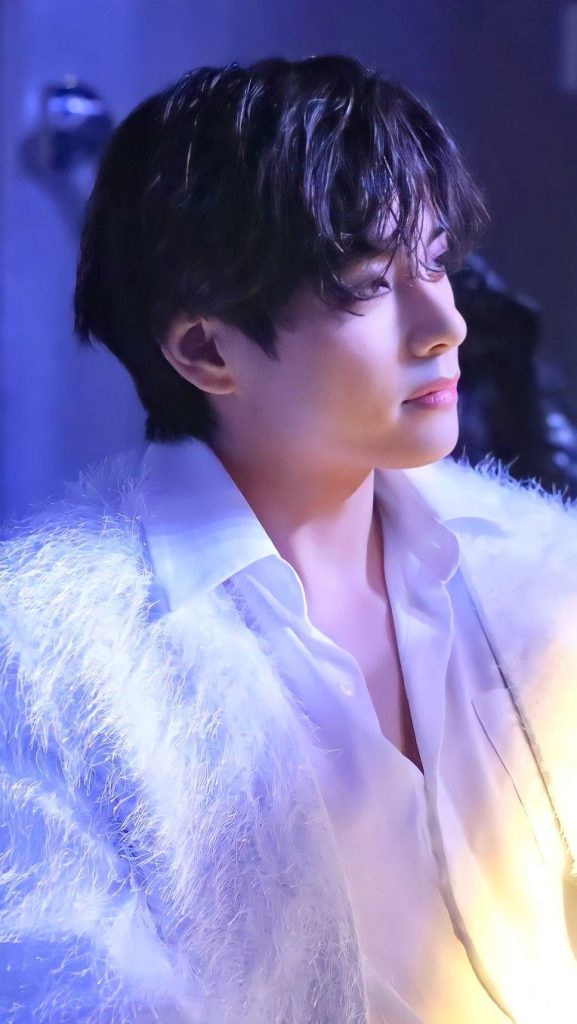 Kim Taehyung is the Netizens’ choice for the world’s sexiest man in 2022 and he most certainly deserves the title always looking like ‘that’. In case you are thinking; Who is he? Kim Taehyung aka ‘BTS V’ is a popular 26-year-old South Korean singer and songwriter with the popular K-pop group BTS, he is one of the most famous faces in K-pop and has been classified as dashing in the media several times in the past. One of the reasons for his nomination is that he is one of the ‘most thirsted over’ celebrities on the internet right now which is why it is not strange the singer and actor lead in the general poll. 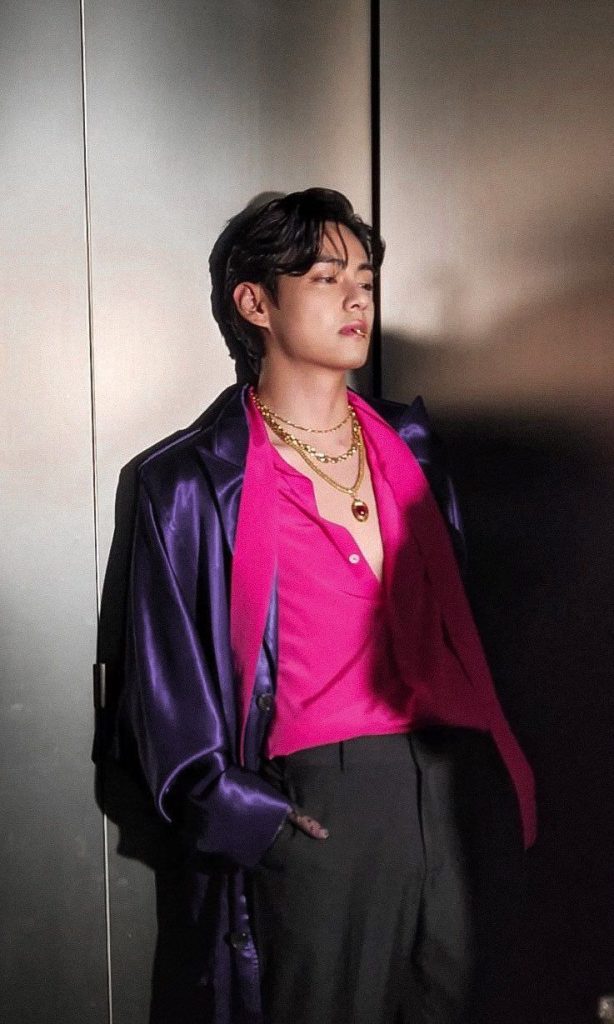 So what makes Kim Taehyung so charming and captivating and adored by so many on the internet? We asked ourselves. Being a publication focused on the public’s opinion we decided to look through the internet and see what fans and admirers think and say about 2022’s world’s sexiest man.

QUOTE: FROM SOME QUORA USERS

You can go read them for a more intensive info but to summarize it, its because we co-relate beauty with symmetry, and V’s features are considered to be scientifically perfect (in the 1:1:1:1 golden ratio) and you could argue that a lot of people around the world may have that, but its very very rare to have the golden ratio. The 1:1 feature is more common internationally

Secondly, his personality is very very attractive and hot and wholesome. His love towards members and the member’s love towards V can be very clearly seen. His fashion sense is also hella drool worthy as well. His duality is so amazing he goes from being a baby TaeTae to “your daughter calls me daddy too” King Taehyung and its honestly so damn attractive wtf

That husky bedroom voice? that hair as smooth as silk? those smoky eyes and lowered eyelids? that goddamn smirk? Yes. Yes. His love towards animals and compatibility with children makes him very unattainable yet perfect husband expectations for females In conclusion, he’s just hot as hell. Dont ask me why” 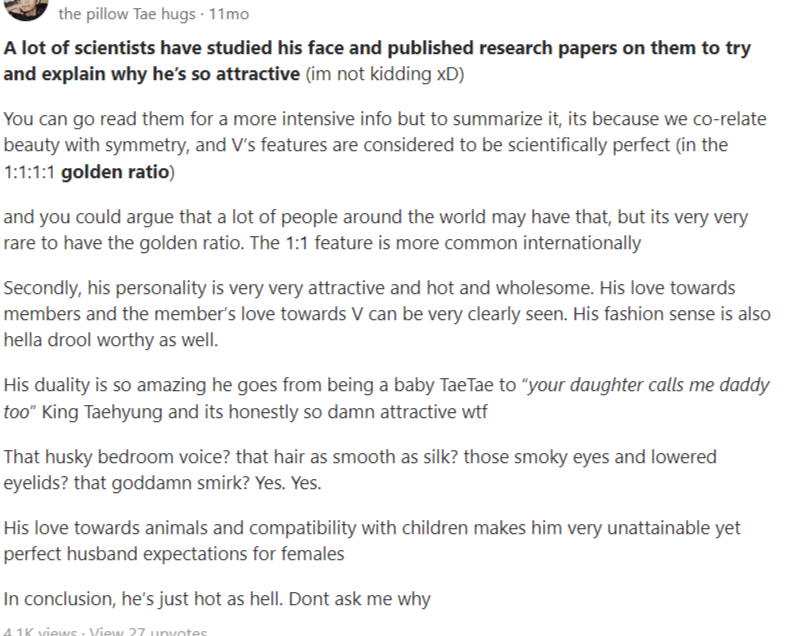 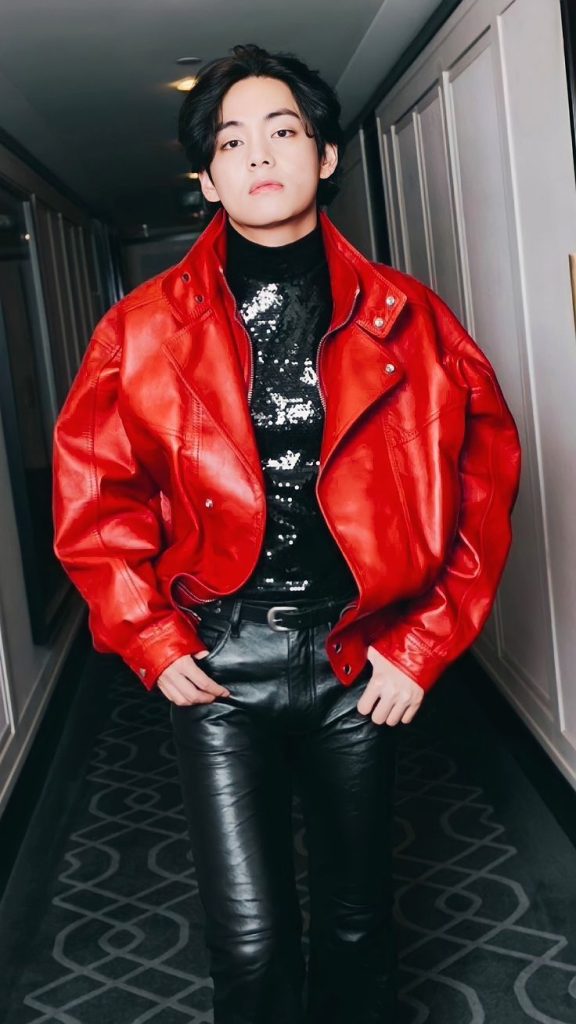 Kim Tae-hyung sexiest qualities according to the internet;

Looking more at the internet, we could clearly see that Taehyung is indeed adored by both men and women young and old for his sizzling looks, he is in fact the hottest man alive right now.