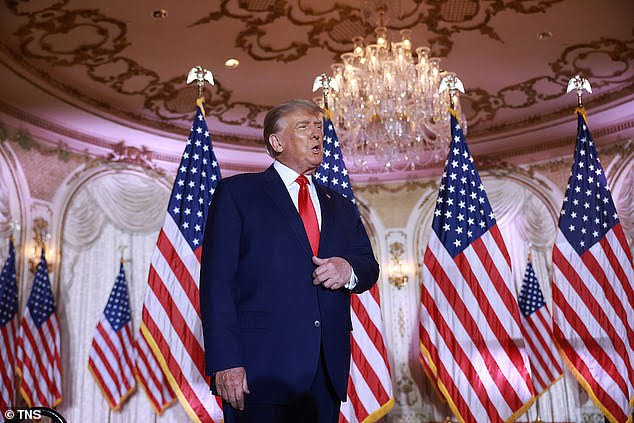 According to a poll released on Monday, Republicans in Iowa think they are now more inclined to support Ron DeSantis than Donald Trump in a 2024 presidential primary, indicating the former president’s hold on the party is eroding.
While Trump dropped 26% of this group’s popularity between November 2021 and November this year, DeSantis earned 20 points of favor with Republicans in Iowa for a prospective White House bid.

In the last two presidential elections, Iowa has supported Trump in the general election, making it the first state in the union to conduct a presidential primary race every year.

Many politicians believe that a candidate’s performance in the midwestern state can determine whether or not they receive a major party nomination.

According to a recent poll by Neighborhood Research and Media, 32 percent of Iowa Republicans would rather see Florida Governor DeSantis win a primary than Trump, who would receive 30 percent of the vote.
The poll was conducted the day before, the day of, and a few days after former President Trump declared his intention to run for re-election in 2024.

The same poll from June of this year revealed that, with a 38 percent to 17 percent divide, GOP supporters in Iowa were far more in favor of Trump’s candidacy than DeSantis’.

When the same poll was taken exactly a year ago, Trump enjoyed a commanding 56 percent to 12 percent advantage against DeSantis.

Republican opinion of Trump has decreased, but DeSantis’ national profile and favorability have grown, particularly in the wake of Hurricane Ian and his reelection earlier this month. 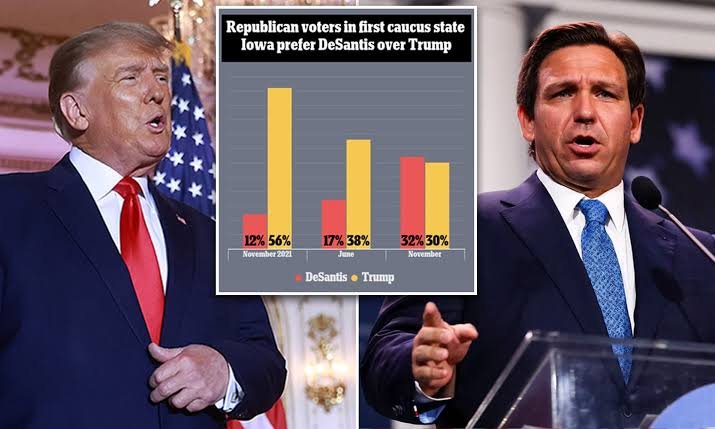 Recent polling indicates that DeSantis is overtaking Trump as the front-runner for the Republican nomination in 2024, but previous polls conducted over the past year indicated that Trump would still be the nominee.
Due to the former president’s alleged continued support among GOP voters, which has been rapidly eroding this fall, other prospective contenders have also stepped up their talk about a run.

Nearly 400 prospective Iowa caucus participants participated in the most recent survey, which was conducted November 14–18. However, the difference between Trump and DeSantis is within the +/- 5 percentage point margin of error.
In his 2022 reelection campaign, DeSantis defeated former Florida governor and Republican candidate Charlie Crist with a commanding 19.4% victory earlier this month. On November 8 in the Sunshine State, DeSantis received over 1.5 million more votes than Crist.
Trump, whose Mar-a-Lago property in Florida serves as his current permanent residence, claimed to have supported DeSantis in the midterm elections but has since started criticizing the likely rival in typical Trump fashion.